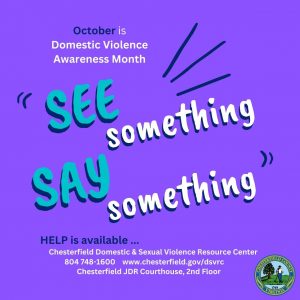 During October Domestic Violence Awareness Month is observed nationally, and locally here in Chesterfield County.  Nationally, the observance was launched in the 1980’s as a way to connect and unite individuals and organizations working on domestic violence issues while raising awareness for those issues. In the 30+ years since, progress has been made to support domestic violence survivors and hold offenders accountable. But, there’s more to be done. Here in Chesterfield County, in 2018, the Chesterfield County Board of Supervisors entered a Perpetual Resolution, recognizing October as Domestic Violence Awareness Month.

What is domestic violence? Domestic violence is the willful intimidation and use of abusive behaviors as a part of a systemic pattern of power and control perpetrated by one intimate partner against another. It can include physical violence, sexual violence, threats, isolation from family and friends, economic and financial control, emotional and psychological abuse, and the abuser’s use of children against the victim. The frequency and severity of domestic violence can vary dramatically. While the dynamics of domestic violence remain fairly consistent, each situation is different. Intimate partner violence does not discriminate. It occurs in all socio-economic groups, ethnicities, races, genders, and ages.

Page load link
We use cookies to improve your experience and analyze website traffic to improve our website's performance. By continuing to the site, you consent to store on your device all the technologies required for this task. See our Privacy Policy for full details. Ok
Go to Top